The first equipment has arrived at a deconversion plant being built by Russia’s Rosatom and France’s Orano in eastern Siberia. The plant is part of a long-term project to manage and make use of depleted uranium stocks in Russia. 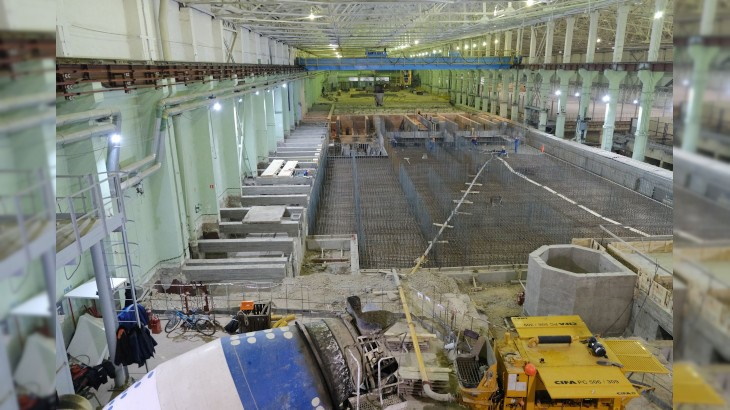 The facility, called W2-EHZ, is sited at the Electrochemical Plant in Zheleznogorsk, which is owned by Rosatom’s fuel subsidiary TVEL.

TVEL announced that first 16 trucks of equipment from France have arrived at the site with kit for power supply, instrumentation, ventilation and process pipelines. Further equipment will arrive during the first half of 2022, when installation will begin in a joint effort by Rosatom and Orano Projets, the engineering arm of France’s nuclear fuel cycle specialist Orano. In the meantime, TVEL said it is pouring concrete for the facility’s foundation slab.

In 2023, when the plant is slated for operation, it will accept deliveries of depleted uranium hexafluoride gas and deconvert these to uranium tetrafluoride, with anhydrous hydrofluoric acid being produced as a by-product. Deconversion transforms the toxic and somewhat corrosive gaseous DUF6 enrichment tailings into a stable powdered oxide form fit for long-term storage, transport or final disposal.

“In this form,” TVEL said, “depleted uranium can be stored in containers in open areas for a long time without any environmental risk and is completely safe for transportation.” TVEL also said it wants to use the hydrofluoric acid to manufacture fluorides used in the electrolytes of lithium-ion batteries, among other things.

Although depleted uranium is seen as a leftover material from the enrichment of uranium, TVEL noted that it is a “valuable raw material” for the future creation of mixed-oxide (MOX) uranium-plutonium fuel for fast reactors. The BN-800 fast reactor at Beloyarsk is gradually switching to MOX and the BREST-OD-300 reactor under construction at Seversk requires uranium-plutonium nitride fuel (known as SNUP).

The new W2-EHZ plant represents an expansion on deconversion work at the existing W-EHZ plant, which Rosatom said has so far processed more than 100,000 tons of uranium hexafluoride. With a joint capacity of 20,000 tons per year they will be able to “stop the growth” of depleted uranium hexafluoride stocks in Russia, said TVEL.

Rosatom’s long term plan is then to increase its deconversion capacity with a third plant, W3-EHZ, and progressively deal with all the depleted uranium hexafluoride that has accumulated at TVEL sites. Achievement of this goal is slated for 2057.