Those who cannot afford to migrate are grappling with ill-effects such as yellowing teeth, brittle bones, deformity and weakness.

In the parched Adivasi village of Devanagar, located 50 km from Adilabad and 2 km from Utnoor town, six people, including a 10-year-old, died in the last one year in quick succession. Most of the people in the tiny village, which has 30 houses and a population of around 100, suffer from deformity and several others are at risk of being afflicted by the same – courtesy: fluoride contamination in drinking water.

The village is inhabited mostly by the aboriginals of Nayakapodu, one of the eight tribal communities identified in Utnoor mandal.

With a series of mysterious deaths, fearing that the village is cursed by some ‘ill omen’, there has been an exodus with several families leaving their homes and migrating to neighbouring villages.

The remaining villagers who could not afford to migrate took up the task of identifying the cause of the deaths by themselves. Noticing that the teeth of young children were turning yellow gradually and observing changes in the body structure and posture of a few elders, the villagers suspected that their drinking water could possibly be contaminated with fluoride. 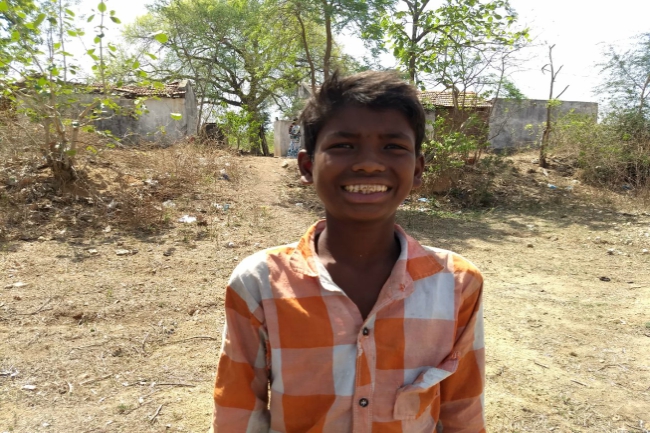 To look into their suspicion, they collected water samples and submitted them to the local authorities, who confirmed the presence of fluoride in excess in their drinking water. They then advised fellow villagers against drinking the water. Although the villagers do not use water from the handpump for drinking, they continue to use it for other purposes like washing rice, water for cattle, bathing and so on. 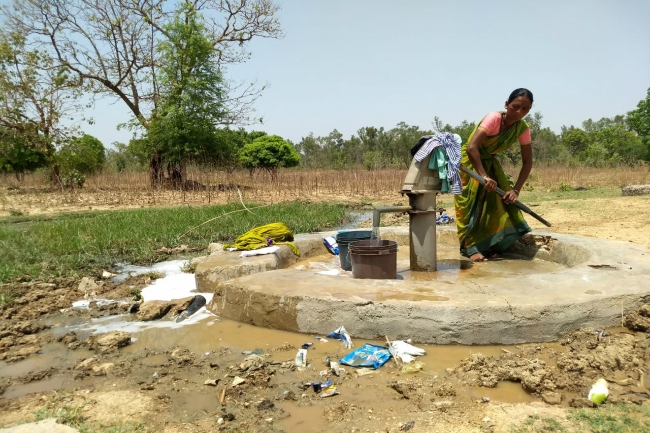 The village has only three handpumps that form the source of drinking water. Not just in Devanagar, but in many hamlets and Adivasi villages, handpumps are the only source of water. The Telangana government’s much-touted ‘Mission Bhageeratha’ project, which provides drinking water from overhead tanks, has not reached these impoverished villages yet.

In Devanagar, two handpumps were dug 10 years ago, adjacent to each other. One belongs to the government primary school and is meant for the students while the other is for the village. After the oldest handpump was declared as fluoride contaminated, the villagers are forced to rely only on these two handpumps, says Lakshman, who lives in the village.

However, due to frequent usage of the handpumps, at times the water dries up. Due to this, the villagers came to a consensus that each household would get only two pots of water each. So before they head for work, the women queue up at the handpump and this sometimes leads to fight between them as they contest with each other to fetch water before the pump dries up.

“Women jostle… sometimes they pull each other’s hair and fight while the men try to make peace,” laughs Lakshman sheepishly, as women gather to detail their plight.

After the laughs end, the women take me and my guide and Adivasi activist, Madhu, to a home close to a small pond where women draw water for cattle, washing clothes and other household purposes. 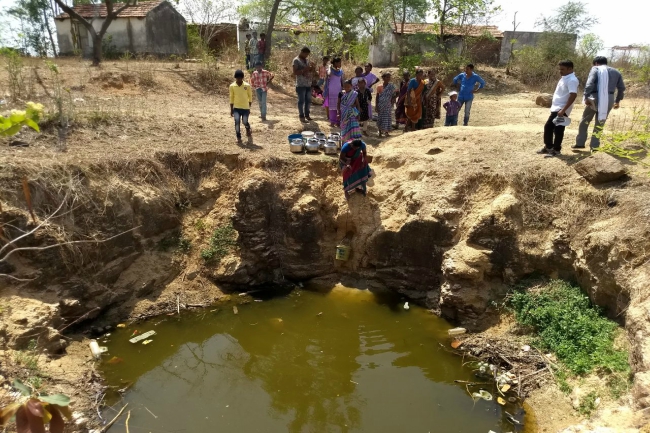 The tragic state of Ankavva’s family

The tiny house, indistinguishable from the rest of the houses, belongs to septuagenarian Ankavva. Her entire family – 17 of them – suffer from illness caused by fluoride contamination, except for her two daughters who are married and reside in a different village.

Ankavva’s movements have been restricted for a few years now. She doesn’t remember since when she developed the deformity.

“I am not sure… Although I don’t suffer any pain, I can’t walk briskly and my movement are restricted,” she complains.

Besides Ankavva, her husband, four sons, her grandsons and granddaughters are affected by fluoride contamination. Her grandchildren’s teeth have turned yellow and brownish, but their parents are less fortunate. They have been bedridden for almost two years now.

Ankavva’s eldest son, Rajanna, mostly stays at home. Earlier he used to work on his farm and when there was no harvest, get employment as a labourer. But for the past two years, owing to his brittle bones and poor health, he remains at home. He also complains of pain in the abdomen area. With little savings, they cannot afford to avail medical services at the clinic. So whenever the pain becomes acute, Rajanna ‘self-medicates’ by burning the area.

“I take a cloth, set it on fire and then place it where it hurts the most,” says Rajanna. 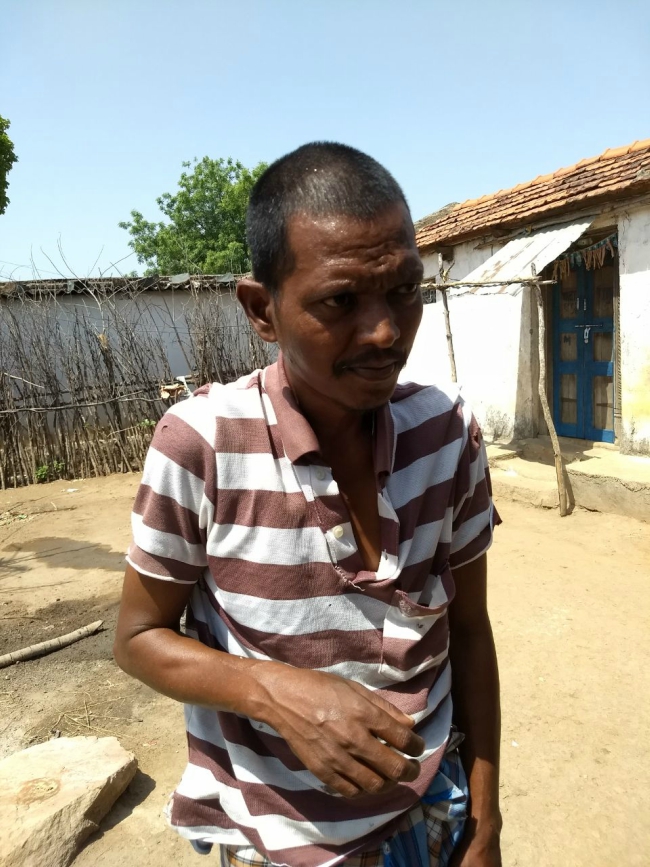 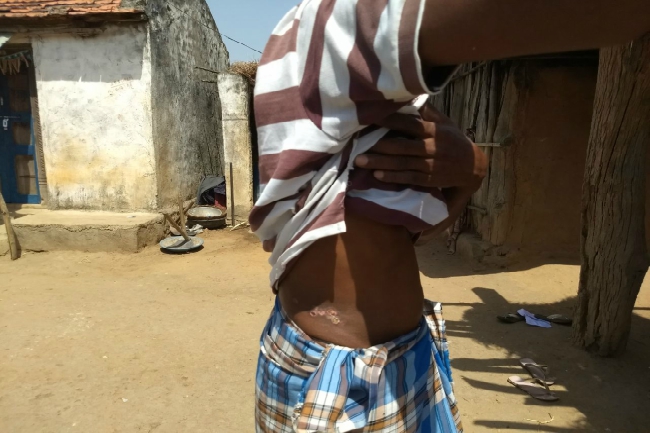 This ‘self-medication’ has left injury marks that haven’t healed yet.

When asked who advised him to try such a method, he replies with a pale face, “I can’t bear the pain. It aches so much that I tear up. By hurting myself I try to distract my mind from the pain.”

A young man who lost his livelihood

Apart from Madhu, human rights activist Athram Bhujang Rao, a popular figure across Adilabad district, and a few of his aides had accompanied us.

Bhujang Rao, after learning about the inhuman conditions under which the residents of Devanagar live, called upon the villagers to assemble at Ankavva’s house, so that he could write up a petition to the government authorities. 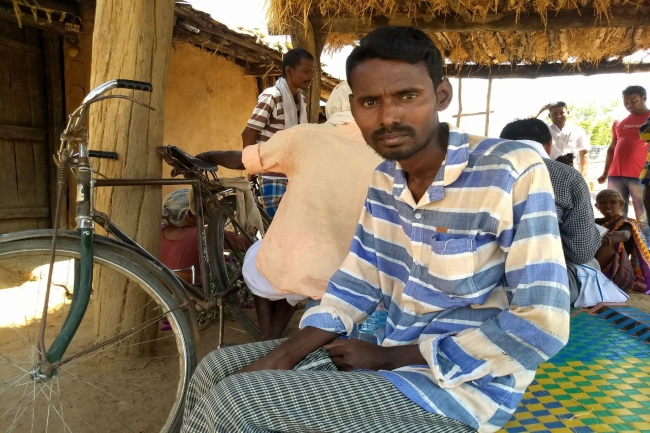 Ravi looks skeletal, as if there was no flesh left on his body, his collar bone protruding, his rib cage visible. He appears poverty-stricken and hardly looks his age.

Ravi was till recently undergoing treatment at the Nizam’s Institute of Medical Sciences (NIMS) in Hyderabad. However, after spending all their money on his medical expenses, Ravi’s family is now debt-ridden. With no money left to continue treatment, Ravi has surrendered himself to Christianity, hoping to find a cure through a miracle. He regularly visits the church in Dhanthanapelli on Sundays.

“We had a house at Shaalavadu, but after I fell ill we had to sell it for my treatment. First I was taken to a private hospital in Utnoor, then to a government hospital and finally to NIMS. The doctors treated me but I didn’t respond positively. They wrote medicines which cost us Rs 2,000 a month. The Rs 70,000 that we got after selling the house was entirely spent on me. Now there is no money left. So I go to church now.”

Ravi used to work as a cement bag loader. However, his body has given up now. He finds it difficult to walk and carry his own weight.

Another village Kunikasan, a village of Scheduled Castes belonging to the Maang community located 50 km from Utnoor, has been facing similar problems. The villagers suffer from kidney-related diseases, with several already having succumbed to it, claims Bhujang Rao.

“Water related health problems are prevalent across the hamlets in Utnoor. While we cannot establish that fluoride contamination has caused their (villagers of Kunikasan) deaths, it is certain that the region is affected with something,” he laments.

What do the authorities say?

The authorities claim that since most of these hamlets are deep in the forest and have no road connectivity, they claim that they are unable to supply water through vehicles.

“For building roads we need to take permission from the forest department, but since it is a forest area they often deny it,” says Utnoor Revenue Divisional Officer Jagadeeshwar Reddy.

The RDO shares that recently he visited another village named Erragunta, where the villagers complained of contamination in the water as the colour of the water had turned red.

He says, “Since the village is deep inside the forest, procuring permission from the forest department to lay roads is a big hassle. We have sought the permission though.”

The RDO has his hopes pinned on ‘Mission Bhageeratha’, which could resolve such crises and avoid conflict with the forest authorities.

But, sadly, according to the RDO, it will take at least two more years for the project to be completed.