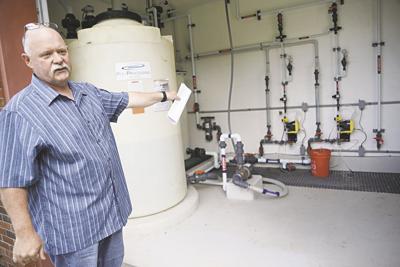 VERNON TOWNSHIP — The plain brick building off Rogers Ferry Road looks too humble to be home to such controversy.

Squat and rectangular, the structure features two overhead doors that can only be seen from inside the 6-foot-tall chain link fence that surrounds the facility. Behind one of the roll-up doors, computer-controlled pumps initiate the addition of a potentially poisonous chemical to the public water supply in a largely unnoticed process that has been going on in the interest of public health for years.

Behind the other, computer-controlled pumps initiate the addition of a potentially poisonous chemical to the public water supply in a hugely controversial process that has been going on for eight days. While supporters contend that the motivation in this case, too, is to improve public health, opponents argue the process is unnecessary, was imposed on residents undemocratically and could pose a threat to public health.

Behind the door on the left is the equipment that adds chlorine to the water Meadville Area Water Authority supplies to customers. The chlorine eliminates pathogens from the water supply and prevents the spread of disease.

Behind the door on the right is the fluoridation system, which went into operation on Aug. 28, more than two years after the authority’s board voted 3-2 in favor of adding fluoride in what was easily the most controversial Meadville-area municipal decision in recent years. What the fluoride does is a matter of much debate, though MAWA plans to add the chemical at the level recommended by the U.S. Public Health Service as optimal for the prevention of tooth decay.

During a tour of the facility this week, MAWA Project Manager Bob Harrington tempered expectations even as he raised the overhead door to reveal the equipment that provoked contentious public meetings, reams of letters to the editor and irate social media postings too numerous to count.

“Everybody said the same thing when we were going to start — they were like, ‘Well, we want to come over and see it,” Harrington said with a glance toward what vaguely resembled a brand-new swimming pool filtration system — more elaborate than might be found alongside a homeowner’s in-ground pool, but not as impressive as what could be seen at a large public facility.

“See what?” Harrington asked rhetorically. “This is it. This is all it does.”

Though no real action could be seen at work in the room behind him, this was no mere swimming pool filter. It was the $245,000 fluoridation system with pumps and piping installed by Konzel Construction of Erie for $185,000 and computer monitoring and control equipment set up by Process and Data Automation of Erie for $60,000.

Taking a closer look, the eye was immediately drawn to a 500-gallon dry storage tank at one end of the room, at more than 6 feet tall the largest piece of equipment. The tank held about 300 gallons of hydrofluorosilicic acid — the form of fluoride that is added to the water supply — purchased at $2.49 per gallon from SAL Chemical of Weirton, West Virginia. Behind it was what Harrington called the “day tank,” a container a little less than half the size of the storage tank that held fluoride about to be added to the system.

Along the wall, a series of vertical pipes connected horizontal pipes at top and bottom. At the center of the network were two yellow chemical dosing pumps, Harrington said, which send the fluoride to the injection point, located nearby on the MAWA compound, where the fluoridated enters the water supply delivered to customers.

Fluoridation of public drinking water was named by the Centers for Disease Control as one of the nation’s 10 great public health achievements of the 20th century. But nearly two decades into the 21st century, the fluoridation of Meadville’s water comes at a significant moment in the history of both popular and scientific attitudes toward the practice.

For decades, concerns about the potential side effects of fluoride consumption have grown, but such concerns have often been dismissed by public health officials as mere conspiracy theories.

Less than two weeks before MAWA began adding fluoride, however, a study published in JAMA Pediatrics, a leading peer-reviewed journal on pediatric medicine, suggested that the consumption of fluoride by pregnant women can lead to lowered IQs in their children.

The effect on any particular child could be as small as a couple of points, the study suggested, though larger at the extreme levels of exposure, but it is still significant, according to Christine Till, the psychology professor from York University that led the study.

“This indicates the possible need to reduce fluoride intake during pregnancy,” the study concluded.

Businesses learn to live with it

Business owners like Michael Reed, owner of Tarot Bean Roasting Co., are less concerned with the scientific consensus than the effect of fluoride on business. With customers expressing concerns about drinking coffee made with fluoridated water and with his own concerns about the effect the chemical will have on his espresso machines and coffee brewers, Reed was troubled by MAWA’s move.

There was not much he could do about in the face of it, however. He would like to install a reverse osmosis filtration system and other measures to remove the fluoride, but doing so isn’t economically feasible for his small business.

Larger businesses are dealing with the change to the water supply as well, though they are perhaps better equipped to deal with it. A spokesman for J.M. Smucker Co., which operates the former Ainsworth pet food facilities in Vernon Township, said the company knew of the addition of fluoride “but it does not impact our products due to the manufacturing processes we have in place.”

It could be weeks before water throughout MAWA’s distribution system contains fluoride at a concentration of 0.7 milligrams per liter, Harrington said.

Harrington grew up in Bucks County drinking fluoridated water from Northampton Township. In more than three decades in the water business, he has worked for systems in Pennsylvania that fluoridate and for those that do not fluoridate. While he’s the person in charge of MAWA’s move to fluoridation, he said he understands the concerns of those who are against it. At the same time, he has watched firsthand as fluoridation moved from the board’s controversial vote to the reality it is today.

As a result, he’s confident about the safety and quality of the water MAWA is supplying.

Mike Crowley can be reached at 724-6370 or by email at mcrowley@meadvilletribune.com.

Editor’s note: This article was updated Sept. 6 to clarify results of the fluoride study.