Calgary stopped adding fluoride to its water supply in 2011 but that doesn’t mean the fluid from your faucet is fluoride-free.

Naturally occurring fluoride is still present in the city’s drinking water at levels ranging from about one-tenth to one-third the amount found prior to council’s decision to stop artificial fluoridation.

Regular testing of Calgary’s treated water in 2014 found fluoride levels between 0.08 and 0.26 milligrams per litre.

Cities that still add fluoride to their water typically aim for a level of 0.7 milligrams per litre in order to improve dental health among the populations they serve. 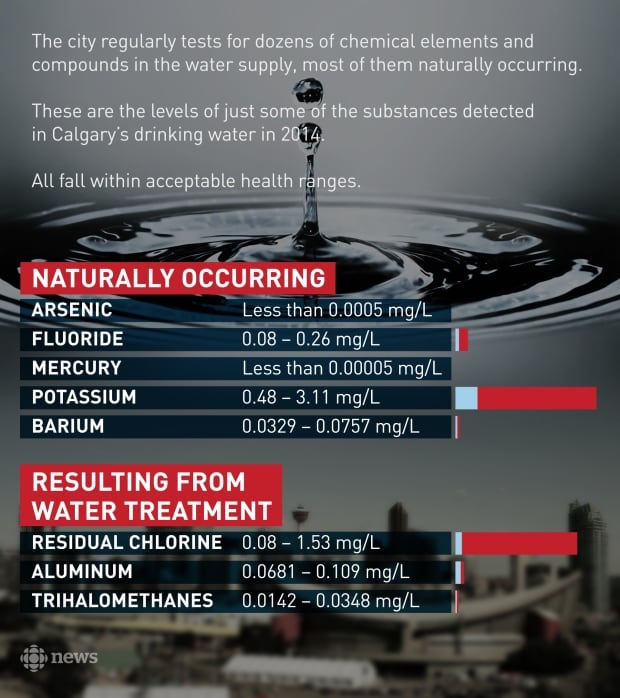 Levels of naturally occurring elements found in Calgary’s treated drinking water in 2014. Minimum and maximum values are shown from regular tests conducted throughout the year. (City of Calgary data/CBC image)

The naturally occurring fluoride in Calgary’s water originates from erosion of rock and soil in the watersheds that supply the city.

Jagorinec said natural fluoride levels tend to be slightly higher in water from the Elbow River as compared to the Bow River, and usually the concentrations are highest in the winter, when flow levels are at their lowest.

These amounts of fluoride are well within provincial and federal water-quality requirements, Jagorinec noted.

The same goes for dozens of other elements that occur naturally in the environment and make their way into the water supply in tiny amounts, including metals such as potassium and barium.

“It’s quite common to find these metals in all surface waters and in well waters,” Jagorinec said. “They just leach of out the natural environment.”

Levels of particularly toxic heavy metals such as arsenic and mercury are also monitored in Calgary’s water but, if they’re present, they’re found in quantities so minute — less than 0.00005 milligrams per litre — that they are effectively nil.

“We’re looking down, in many cases, in the part-per-billion level — so, really tiny concentrations — but we’re still unable to detect any,” Jagorinec said.

North American cities that add fluoride to their water typically aim for a concentration of about 0.7 milligrams per litre, which is considered to be an “optimal” level by most health authorities, including Health Canada and the Department of Health and Human Services in the United States, to protect dental health without adverse effects.

Levels higher than that can lead to an increased chance of dental ?fluorosis, a condition that results in a change in the appearance of tooth enamel that occurs when children’s developing teeth are exposed to excess amounts of fluoride.

Some cities, including Calgary, have stopped their fluoridation programs based on concerns that fluoride has toxic effects on humans, but Health Canada says there is no evidence of that when drinking water levels are kept below 1.5 milligrams per litre.

“The weight of evidence from all currently available studies … also does not support a link between fluoride exposure and intelligence quotient deficit, as there are significant concerns regarding the relevant studies, including quality, credibility, and methodological weaknesses,” Health Canada states.

One paper often cited by critics of fluoridation came from researchers at the Harvard School of Public Health, who conducted a meta-analysis of dozens of studies of children in China who were consuming drinking water with naturally occurring fluoride levels as high as 11.5 milligrams per litre.

The researchers found “children in high-fluoride areas had significantly lower IQ scores than those who lived in low-fluoride areas.”

After publishing their initial results, the researchers issued a special statement noting some of the groundwater fluoride levels in China “greatly exceeded levels that are typical in the U.S.”

“These results do not allow us to make any judgment regarding possible levels of risk at levels of exposure typical for water fluoridation in the U.S.,” the statement reads. “On the other hand, neither can it be concluded that no risk is present.”

For Dr. Richard Musto, medical officer of health for Alberta Health Services’ Calgary zone, there is no doubt that fluoride at Health Canada’s recommended levels would be beneficial to the population, as a whole.

He believes city council should re-examine its decision to stop adding fluoride to Calgary’s water.

“I hope they will look at it very carefully and reconsider the question of community water fluoridation and, in fact, put it back in the water,” Musto said.

“We would all benefit.”