Fluorinated greenhouse gases (F-gases) contribute to climate change and in 2019 made up 2.3% of total EU greenhouse gas emissions. F-gases have a range of applications, particularly in the refrigeration, air conditioning and heat pump sector. Most F-gases have much higher global warming potentials than other greenhouse gases. This briefing outlines the important trends in the EU supply of F-gases for the period 2007-2020 and monitors progress under the hydrofluorocarbon phase-down schemes of the F-gas Regulation and the Montreal Protocol.

Hydrofluorocarbons (HFCs) account for the majority of fluorinated gas (F-gas) emissions. To reduce these, the F-gas Regulation (EU) No 517/2014 introduced an EU HFC phase-down scheme and a quota system for companies. Since 2019, the EU has also been bound by an obligation to reduce HFC emissions, agreed internationally under the Kigali Amendment to the Montreal Protocol.

Please consult the annex to this briefing for more graphs and data tables.

The Montreal Protocol was established in 1987 to cut the consumption and production of synthetic substances that destroy the protective ozone layer (ozone-depleting substances, ODS). In the EU, ODS are regulated separately under Regulation (EC) No 1005/2009 (Ozone Regulation). Phasing down ODS has led to the increased use of certain F-gases, most prominently in refrigeration and air conditioning, since the early 1990s, as these chemicals have similar properties to ODS but do not affect the ozone layer. Consequently, emissions of F-gases in the EU, of which more than 90% are HFCs, increased by about 70% between 1990 and 2014.

The EU F-gas Regulation (EU, 2014) implements an EU-wide phase-down of HFCs, which started in 2015. Its aim is to cut EU emissions of HFCs by two thirds by 2030 compared with 2014 levels. It mandates companies to report their annual production, imports, exports and other activities involving HFCs and other F-gases and includes all the F-gases covered by the Kyoto Protocol: HFCs, perfluorocarbons (PFCs), sulphur hexafluoride (SF6) and nitrogen trifluoride (NF3) and others such as unsaturated HFCs and HCFCs (hydrochlorofluorocarbons). The F-gas Regulation is presently scheduled for review. The impact assessment as part of a revision proposed by the European Commission is currently ongoing.

The EU’s key objective is to achieve climate neutrality by 2050, with a net reduction target of 55% by 2030 compared with 1990. This has already been adopted as the European Climate Law. The ‘Fit for 55’ package details how to achieve this. F-gases are included in the objective.

Phase-down of HFCs under the EU F-gas Regulation

The HFC phase-down under the F-gas Regulation is implemented by imposing annual quantitative limits (quotas) on the placing of HFCs on the EU market by producers and importers. The EU-wide maximum quantity for HFCs has been subject to a stepwise reduction since 2015, as shown in Figure 1. In 2020, EU-wide placing of HFCs on the market was 4% below the 2020 overall market limit set by the quota system (2% in 2019). The companies that did not fully use their quota counterbalanced the few cases of quota exceedance by importers of bulk HFCs and equipment importers.

As EU industries have been moving to alternatives with low global warming potential (GWP), the demand for HFCs has been decreasing. While the demand for refrigerants remains high, there has been a shift to non-HFC alternatives with lower GWPs. In 2015, the placing on the EU market of bulk HFCs was 85% of the maximum quantity and had decreased by 52% by 2020, a quicker rate of decrease than that for the maximum quantity itself, which fell by 45% over the same period. The balance has largely been converted into quota authorisations, which can be stored over the years and which have been needed by importers of refrigeration, air conditioning and heat pump (RACHP) equipment containing HFCs since 2017.

Illegal HFC imports outside the reporting and compliance system under the F-gas Regulation continue to be alleged, and these cannot be quantitatively accounted for in this briefing. A European Commission study (EC, 2019) concludes that it is not possible to quantify customs evasion and that the HFC phase-down continues to be successful in promoting innovation and a shift towards climate-friendly solutions, particularly as gas prices in the EU remain significantly higher than on the world market.

Notes: Values are based on obligations under the new F-gas Regulation (EU) No 517/2014. The geographical scope of the data presented on placing on the market is EU-27 and the UK. The maximum quantities of the EU HFC phase-down shown for 2015-2019 and for 2020 apply to EU-27 and the UK. EU-27 maximum quantities for 2021 onwards have been recalculated to reflect the effects of Brexit. The HFC consumption limits under the Montreal Protocol are still in EU-28 scope for the full 2019-2036 time series, however, they will undergo recalculations to fit the EU-27 scope in the future. Please see Table 27 in the annex to this briefing for a description of the difference between the two metrics: ‘EU placing on the market’, which is relevant for compliance with the EU HFC phase-down, and ‘HFC consumption’, which is relevant for compliance with the Montreal Protocol HFC phase-down.
Mt, million tonnes.
Sources: EC (2021); EEA (2020, 2021b).
More info here…

More graphs and data tables relating to compliance with the EU HFC phase-down are provided in the annex to this briefing.

Supply of F-gases in the EU

The total supply of F-gases was reasonably stable from 2007 until it peaked in 2014, just before the HFC quota system entered into force. After 2015, a downwards trend reflected the effect of the EU HFC phase-down under the F-gas Regulation. The volume of total supply in physical tonnes in 2020 was about 1% higher than in the previous year (Figure 2), with an almost 3% higher GWP in 2020 than in 2019 (Figure 3). Refrigeration and air conditioning continue to be key applications.

An important detail is that statistics in physical tonnes reflect the use patterns of F-gases in EU industries, while the amount of F-gases expressed in carbon dioxide equivalents (CO2e) reflects their potential relevance for climate change policy and the HFC phase-down.

A key driver for the F-gases supply was the HFC supply, which increased by 3% in mass or by 2% in CO2e, compared with 2019. As detailed below, the main reasons behind this increase were higher imports, which more than outweighed a decrease in production.

The supply of unsaturated HFCs and HCFCs with very low GWPs, replacing HFCs with significantly higher GWPs, has decreased by 5% and stabilised close to 2018 levels at about 30% of the HFC supply. When comparing the gases with the highest GWPs for the years 2019 and 2020, there was a 12% increase for SF6, and, less relevant for overall F-gas supply in CO2e, an 8% increase for NF3 and an 18% decrease for PFCs. 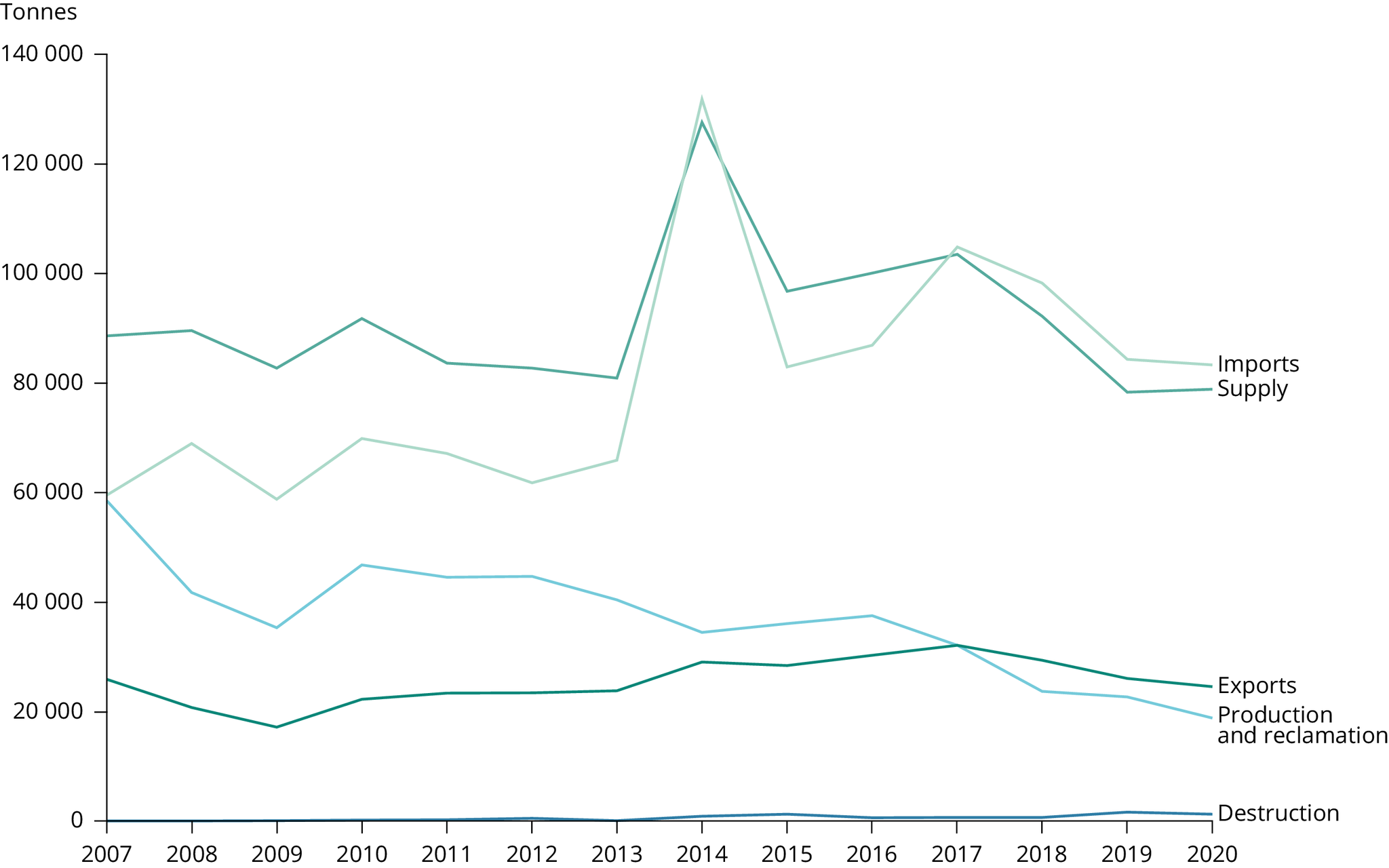 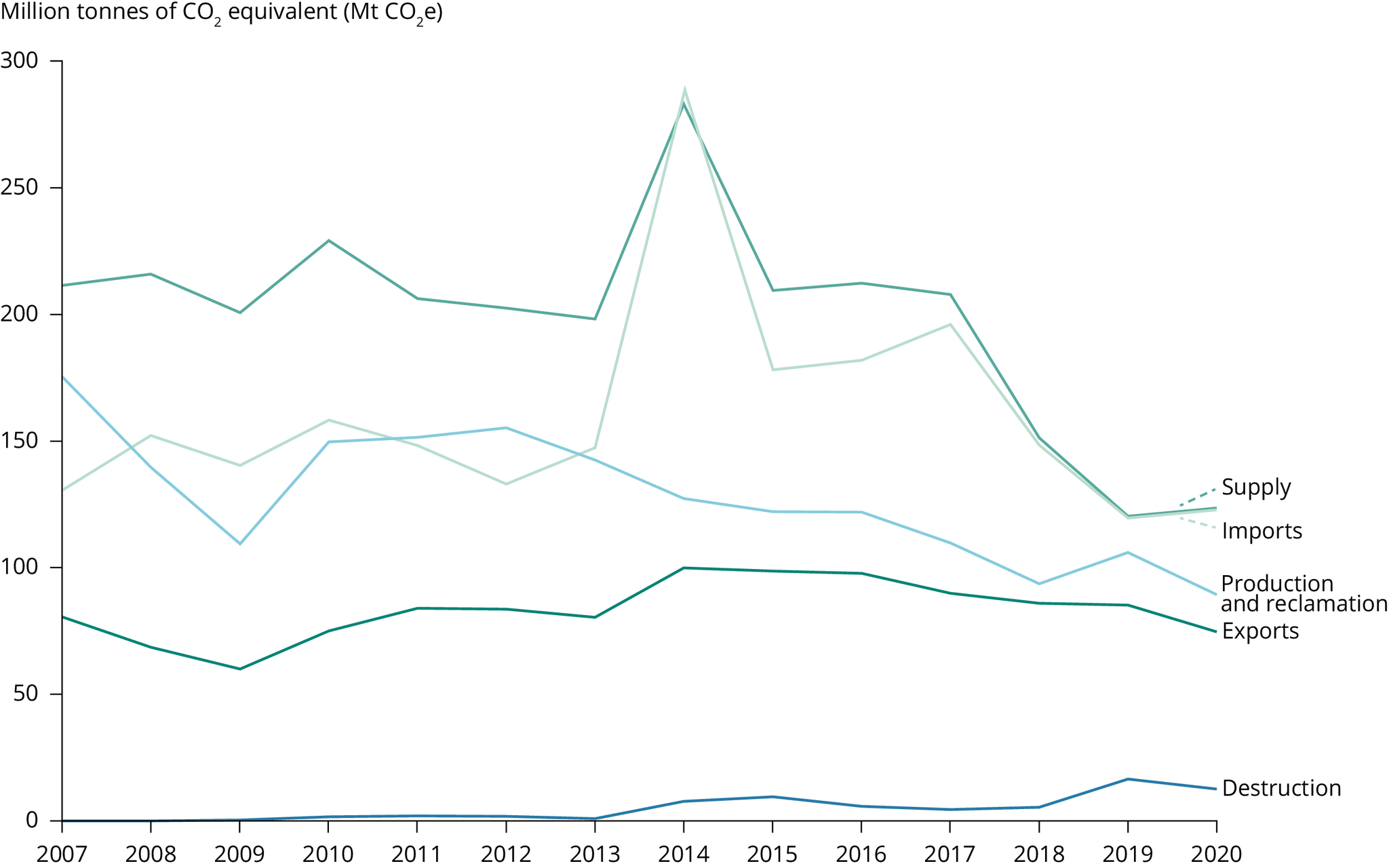 The trend in F-gas supply in the EU reflects trends in physical flows of F-gases: production, reclamation, imports, exports and destruction in the EU-27 and the UK.

More graphs and tables summarising data reported by companies on the production, import, export and destruction of F-gases in the EU, for the period 2007-2020, are contained in the annex to this briefing. The annex also documents the methodology used, in particular for the calculation of the supply, placing on the market and consumption metrics, and institutional arrangements.

Öko-Institut, Ricardo and Öko-Recherche, 2021, Evaluation and impact assessment for amending Regulation (EU) No 517/2014 on fluorinated greenhouse gases, Briefing paper for the stakeholder workshop on preliminary findings, 6 May 2021, accessed 13 September 2021.