CHANDIGARH: The chemical contamination of groundwater in southwestern region of Punjab is posing a great health risk to people living there, points out a study conducted by the Central University of Punjab, Bathinda.

To investigate the source, distribution and potential health risk assessment of groundwater quality, study was conducted in three districts — Bathinda, Ludhiana and Barnala — in the Malwa region, which were picked based on their dependency on groundwater for drinking, domestic, agricultural and industrial activities. 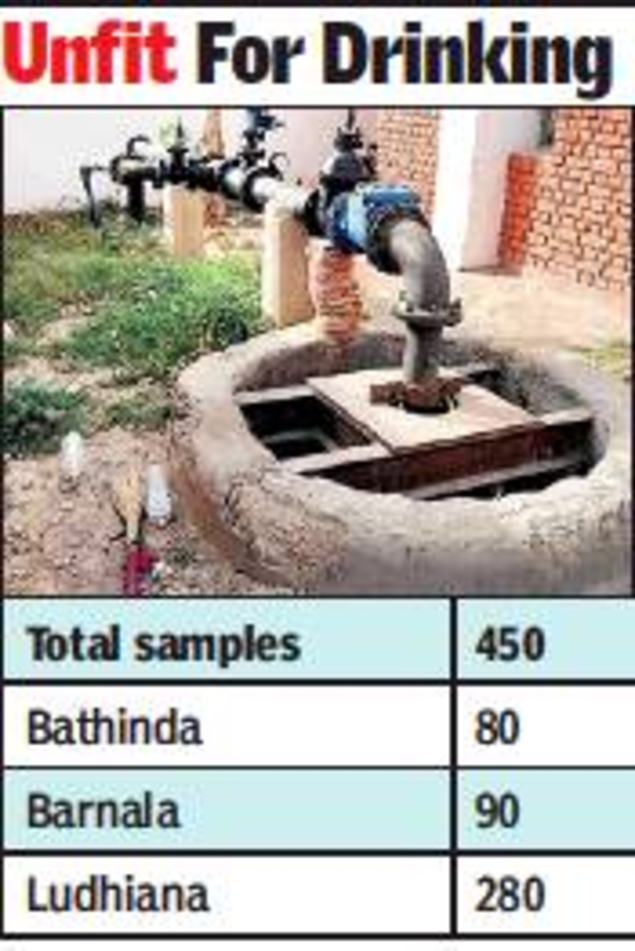 The concentration of chemicals was found above permissible limits of World Health Organization (WHO) in majority of samples collected from three districts. The quality of water in Bathinda was found to be worst due to elevated levels of alkalinity, hardness, fluoride, uranium and nitrate, putting inhabitants of the district at higher health risk than Barnala and Ludhiana.

A total of 450 samples were collected from hand pumps/tubewells located in residential, agricultural and industrial areas from all three districts — Bathinda

The uranium content was the highest in Bathinda and decreased as one moved towards Ludhiana. The concentration of iron was high in Ludhiana, with 70% of samples having a higher concentration than the prescribed limits of Bureau of Indian Standards (BIS).

The findings of the study based on total dissolved solids, alkalinity and hardness suggest that the groundwater in Bathinda, Barnala and few parts of Ludhiana districts is not fit for drinking purposes.

The study held that Bathinda’s location on lower elevation may be a strong reason for accumulation of chemicals by geogenic percolation of underground water.

The study also held that less rainfall, high evaporation rate and alkaline environment were responsible for increasing contaminants in the district.

‘Govt should provide potable water’
Among cancer-causing chemicals, risks due to arsenic and chromium exceeded the United States Environmental Protection Agency’s acceptable limit in all the three districts but their concentration in groundwater was low as compared to BIS/WHO drinking water standards. In Bathinda, carcinogenic risk of arsenic and chromium was highest.

The carcinogenic risk of chromium was also observed in Barnala and Ludhiana districts.

The findings of the study conducted by Ravishankar Kumar, Sunil Mittal, Prafulla Kumar Sahoo and Sunil Kumar Sahoo, has been published in the international journal Environmental Geochemistry and Health.

The study recommends that the government take preventive steps to provide potable water facilities along with awareness camps on the health risks of drinking non-potable water. It also called for need for routine check-up of people residing in the study area.