Last month’s explosion at a 150-year-old oil refinery in Philadelphia could have forced 1.1 million people to evacuate.

At 4 a.m. on June 21, South Philadelphia residents were awoken by the sound of a large explosion: The Philadelphia Energy Solutions oil refinery was on fire for the second time in two weeks. Neighbors watched as the flames turned into a giant mushroom cloud and as the mushroom cloud turned into a thick blanket of black smoke. The explosion was so big it was recorded by a satellite in space.

“I could hear it from my house,” said one resident, PennEnvironment Executive Director David Masur. “We were two blocks out of the shelter-in-place radius.”

The explosion occurred close to where a large volume of hydrofluoric acid was stored ? and if that had caught fire, it could have done devastating damage to the community, Masur explained.

“If that had exploded, you would have had a huge hydrofluoric acid cloud, which has all sorts of negative health effects depending on exposure. We would have had to evacuate a 7- to 10-mile radius, that’s 1.1 million people. It would have been catastrophic.”

Philadelphia Energy Solutions was just one of 46 refineries in the U.S. that continues to use the chemical compound. Although there were some disputes about the future of the refinery, which has since been declared shut down, just about everyone involved can agree that the use of hydrofluoric acid is a problem. 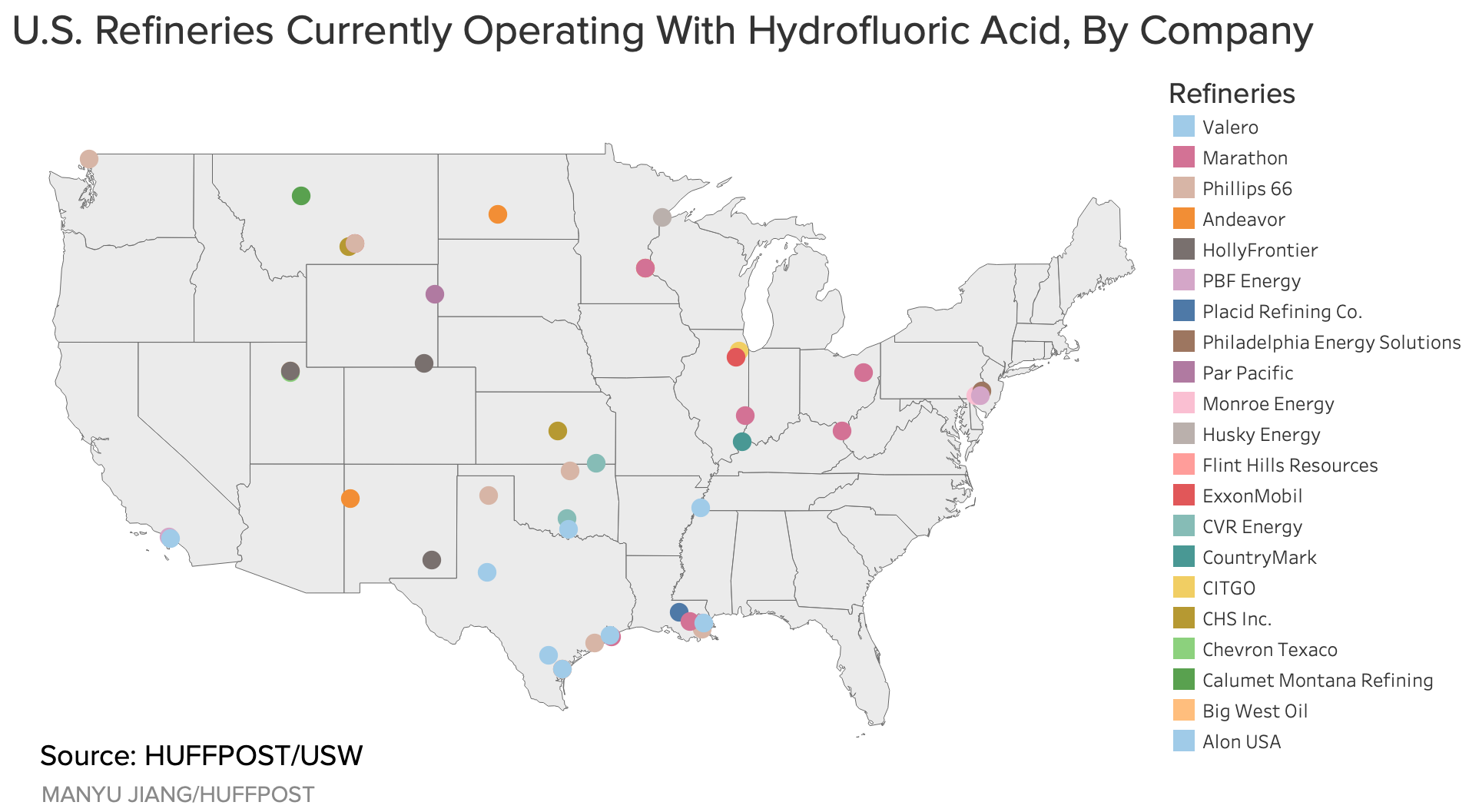 Exposure to the chemical compound can, according to the U.S. Centers for Disease Control and Prevention, cause myriad health issues, including skin and eye irritation, chronic lung disease, blindness, esophageal damage and bone loss. Some of these health issues can be fatal. Community organizers have also pointed out that lower-income communities of color are often most likely to be exposed.

In 2013, the United Steelworkers union (USW) published an expansive study on the effects of hydrofluoric acid (commonly referred to as HF) use in oil refineries across the country. The survey not only found that the chemical compound itself is dangerous but also that the systems in place to contain it are inadequate and that workers aren’t properly prepared or trained to deal with any emergencies.

“The only certain way to eliminate the risk of a catastrophic HF release is to eliminate HF,” the USW concluded. “Until that can be done, the safety of existing HF units must be improved.”

Despite there being several adequate alternatives to HF, such as sulfuric acid, these refineries continue to employ it in their alkylation processes for arguably one simple reason: It’s cheaper.

The plants that still use HF are largely located in rural areas, but some, like the one in South Philly, are in densely populated cities. A disaster at the Chevron Texaco plant in Salt Lake City would affect 1.1 million people, according to the USW report ? the same amount of people as a hydrofluoric acid explosion at the PES plant would have. Other plants in Chicago; New Orleans; Texas City, Texas; Minneapolis; Canton, Ohio; and Memphis, Tennessee, would also put more than 500,000 community members at risk in the event of a hydrofluoric acid release.

The oil industry has long defended the use of HF. After the 2015 Torrance, California, refinery explosion that injured four workers and that catapulted an 80,000-pound piece of debris to just a few feet from an HF tank, the then-manager wrote an op-ed in 2017 defending the plant’s use of the product — and disparaging activists for leaving door hangers about the incident.

But those activists ? many of whom are residents who have long endured the consequences of living in communities polluted by these plants and in fear of a catastrophic disaster, tell a different story.

“There’s no accountability to the community,” said Michele Roberts, an advocate and national co-coordinator at the Environmental Justice Health Alliance.

Roberts, along with many environmental justice advocates, worries that the “small gains” made under the Obama administration to hold the industry accountable will be entirely rolled back under President Donald Trump ? and many already have.

Gym was recently one of only four of 17 Philadelphia City Council members who voted against building a new liquefied gas plant in the same neighborhood as the refinery that just caught fire. The plant will produce about 1 billion gallons of fossil fuels in the next 20 to 25 years.

The fire at the 150-year-old plant ? the biggest one on the East Coast, processing about 335,000 barrels of crude oil per day ? was put out completely by the following Saturday morning. Mark Smith, the company’s CEO, announced June 26 that the plant would begin the process of shutting down the refinery and that the company will attempt to sell it and restart.

“Plants like this should be shut down,” Marus said. “They should not be allowed to put communities at risk.”

Investigations after accidents like these are simply not enough, he said.

“Is figuring out the cause of the problem enough? No. We have to shut it down. We have to protect communities, and that includes protecting the workforce.”

Many in the South Philly area are concerned about layoffs for the thousands of people employed by the refinery.

“We think that this refinery and every other workplace can be made safe,” Michael Wright, director of health, safety and environment for the USW who worked on the union’s report, told HuffPost. “We very much would like to see it stay open.”

Gym, like Masur and the steelworkers union, acknowledges that decisions about industry infrastructure should not be taken lightly, considering the jobs at stake and the potential economic downturn as a result of the plant’s closure.

“I don’t want to be too flippant about it,” Gym said. “It’s a traumatic thing. It’s a really, really serious tragedy that’s happened to our city. Nevertheless, we’re going to have to think ahead. We are potentially losing up to 1,000 jobs and are left with a massive cleanup … this is a cautionary tale for those who are doubling down in this industry.”

CORRECTION: An earlier version of this article suggested the Philadelphia explosion was heard in space. Rather, the explosion was seen by a satellite in space.