It’s a daunting task: How to break down “the forever chemical?”

But scientists across the country are researching, with urgency, ways to bust apart or capture per- and polyflouroalkyl substances, or PFAS. State officials suspect the potentially harmful compound could be contaminating more than 11,000 sites in Michigan, and hundreds more across the country.

In addition, Michigan Technological University is examining how granular-activated carbon filters, the most common solution to dealing with PFS contamination, can be optimized for peak performance at the lowest cost.

There’s no federal-scale research initiative on cleaning up PFAS contamination. The U.S. Environmental Protection Agency, in its PFAS Action Plan released in February, said it “plans to evaluate the effectiveness and cost of existing treatment and remediation technologies for a variety of PFAS contaminated sites and develop and test new technologies and approaches for cleaning up PFAS contamination.” The agency stated it will accomplish this by working with the Department of Defense and states, industry, universities and others to help lead the science in this area.

PFAS was used in a host of industrial and consumer products, from aqueous firefighting foam to nonstick, Teflon pots and pans; Gore-Tex waterproof clothing; ScotchGard stain and water protectants; and even sandwich wrappers, microwave popcorn bags and dental floss. Scientists now, however, understand the chemicals don’t break down in nature, and have been linked to health problems including cancer, thyroid and liver disorders, and more.

Some 47 sites across Michigan have PFAS levels in soil, groundwater and/or surface water that exceed the U.S. Environmental Protection Agency’s lifetime healthy advisory number of 70 parts per trillion — a number above which a lifetime of exposure could be expected to harm health. Nationwide, the Pentagon last year identified 401 military sites where there are known or suspected releases of commonly used PFAS compounds known as  PFOS and PFOA, through the use of firefighting foam. A recent study by the Washington-based nonprofit Environmental Working Group, citing updated federal government data, identified 610 sites in 43 U.S. states or territories known to be contaminated with PFAS, including drinking water systems serving 19 million people.

Why PFAS is the nearly unbreakable compound

Per- and polyfluoroalkyl substances – PFAS – are made up of a chain of carbon atoms, surrounded by fluorine atoms. 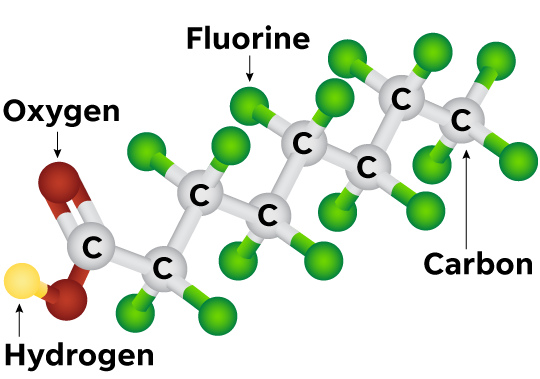 The carbon-fluorine bond is one of the strongest in nature. This made PFAS super-slippery, and great for uses such as grease and water resistance. But it also means natural processes that break down many other compounds: heat, radiation, humidity, dilution – don’t really work on PFAS compounds.

A piece of steel rusting — a natural oxidation process in the presence of moisture. PFAS compounds, however, strongly resist such natural chemical changes and breakdowns. SOURCE U.S. EPA

What makes PFAS so problematic is its tightly connected carbon and fluorine atoms, one of the strongest bonds in nature. Natural processes that break down other compounds don’t work on PFAS compounds.

“Imagine hundreds of thousands of single-crystal diamonds, 1 micrometer in size, less than the width of your hair,” said Cory Rusinek, a scientist in the MSU Fraunhofer lab.

“Diamond is the most robust electrode material you can make. It’s able to withstand the high voltage and high current you need for electro-chemical oxidation, which is basically what we use to destroy PFAS.”

Arrays of thin electrodes covered with the tiny diamonds are introduced to PFAS-containing water, and then a high-voltage charge is applied.

“The PFAS molecules interact with the surface, they oxidize (lose electrons, an atomic component), and there’s defluorination,” Rusinek said.

What’s left are common elements and compounds that are far easier to deal with than PFAS, such as carbon dioxide and fluoride, he said.

The treatment has shown great success in the laboratory and on a small scale, Rusinek said. The problem, however, is the amount of electricity needed: 25 to 70 watt-hours per liter of contaminated water. For a wastewater treatment plant or a system controlling contaminants flowing from a landfill or polluted area, dealing with tens of thousands, hundreds of thousands or even millions of gallons of water, it’s too big of a power bill.

Instead, the treatment might work with other methods that absorb, isolate and concentrate PFAS, such as some very fine, membrane filtration systems. The diamond-electric treatment then would be applied to a much smaller volume of water with a much higher concentration of PFAS contamination.

The Michigan State project, only started about 18 months ago, is now moving to a larger-scale laboratory study and “mini-pilot studies to determine what the cost of a system might be,” Rusinek said.

In this process, gas is bubbled through PFAS-contaminated water, concentrating the compounds at the surface. “They’re surfactants  — they’re like soap,” Holsen said. “They want to be at the water-air interface.”

Then, metal electrodes transmit electricity through a layer of gaseous argon. The electricity flow forms a high-energy plasma at the electrode tips. (Ever see a decorative plasma ball, with which you can touch the outer glass orb and have a little lightning bolt dance to where your finger is touching? Clarkson’s “enhanced contact electrical discharge plasma reactor” operates via the same concept.)

The plasma creates short-lived “free radicals,” unstable atoms with only one electron, “that can break the carbon-fluorine bond, which is the backbone of the PFAS molecule,” Holsen said.

“It continually unzips the molecule, keeps chopping down to fluoride ions, carbon dioxide” and other products “that are much less toxic,” he said.

The process for treating PFAS was discovered “kind of by serendipity,” Holsen said. The university lab was working on treating general contaminants in water, while looking at how PFAS is accumulating in and affecting the Great Lakes as part of another project

The Air Force in 2017 provided $1 million in funding for the continuation of Clarkson’s project.

“We have some (plasma) reactors in the back of a 20-foot trailer,” Holsen said. The university will move from the lab to the field, testing its technology on 55-gallon drums of PFAS wastewater from Air Force sites contaminated from years of use of PFAS-containing firefighting foam.

“There’s a large potential for this being a viable approach to PFAS contamination,” he said.

University of Cincinnati: Catalyst for change

At the University of Cincinnati, researchers are developing a technology to remove fluorine from PFAS compounds and oxidize it, ending with its “conversion to environmentally friendly byproducts,” said researcher Wael Abdelraheem.

“Carbon-fluorine is a very strong bond,” he said. “We’ve established an iron-based catalyst in our lab that has a very strong reducing power. It can defluorinate the PFAS.”

Abdelraheem said he couldn’t provide many more details, as a patent is pending on the technology.

Researchers are now working on scaling up the project, verifying that they can reproduce their results, and assuring their process is not creating undesirable byproducts, Abdelraheem said.

At Michigan Technological University in Houghton, researchers are working with the most common protective product in use today for PFAS — granular activated carbon filters. But the focus is on how to make them most effective.

The carbon filters don’t destroy PFAS compounds, they only capture them. But filtration needs might vary in size from a home system to a large-scale system for a municipal water treatment plant. Michigan Tech’s research is on granular-activated carbon filters.

The modeling technology “accounts for everything,” Labisch said — the amount of water, flow rates, the amount of PFAS and other contaminants and organic matter in the water.

Designing a system that’s exactly right-sized is important for local governments and others who need to control costs, he said.

“If you know what’s in our water, we can tell you how big you need to make your absorber,” Labisch said.

“All of these technologies have little caveats,” he said. “There’s really no one, true solution. It’s going to be a puzzle of a few different remediation options. It’s just finding that right combo.”