The author says that several factors have major effects on dental health, especially diet, personal dental habits, professional care and genetics. But based on a wealth of credible data, fluoridation isn’t one of them.

First, public and private funders are collaborating to help Oregon kids get more access to professional dental care. This is very good news. No one wants kids, or adults, to suffer from bad teeth, and everyone involved in this work deserves a lot of credit.

Unfortunately, the other two main points – Oregonians have the worst teeth in the country and water fluoridation is the most effective (and cost-effective) way to address the problem – are simply wrong.

Let’s set the record straight, starting with the oft-repeated claim that “For every $1 spent on water fluoridation, an average of $38 is saved on dental treatment costs per person per year.” This comes from one 2001 paper by Griffin et al and has been touted as gospel by fluoridation promoters ever since.

But last year, Griffin’s paper was thoroughly rebutted by the Lo/Thiessen study, which calculated no such savings. It determined that Griffin underestimated actual fluoridation equipment, repair and employee expenses ($7-$9 per hour labor costs?) and omitted any costs for related health problems caused by fluoridation chemicals, such as treatment for fluorosis.

For oral health, let’s use two measurements that have data for most or all states. For kids, survey dates can vary. For adults, all figures are 2012. According to the CDC’s Oral Health Division, Oregon ranked 29th in third grade children in having at least one cavity – not great, but hardly at the bottom. Oregon’s rate was 57.5%, close to the national average of 54.2%.

For adults 65 and older who have lost six or more teeth due to tooth decay or gum disease, Oregon’s rate, 34.7%, ranked 10th best in the country.

Only 23% of the state is fluoridated, ranking us 48th in the country. Government and the American Dental Association consistently try to blame high cavity rates on lack of fluoridation. To recap, virtually no such causation, or even correlation, exists:

Indeed, solid evidence of fluoridation’s ineffectiveness is deep and wide:

Then there’s the Cochrane Collaboration, an independent organization of more than 37,000 medical and scientific volunteers in more than 130 countries. Its research is based on the principles of evidence-based medicine and it’s considered the gold standard of evaluating effectiveness.

Cochrane cited solid scientific data finding topical applications like sealants and varnish to be effective in two 2013 studies, but in 2015, it found virtually no such credible evidence for fluoridation:

“The available data come predominantly from studies conducted prior to 1975 . . . over 97% of the 155 studies were at a high risk of bias, which reduces the overall quality of the results . . . We did not identify any evidence . . . to determine the effectiveness of water fluoridation for preventing caries in adults . . . There is insufficient evidence to determine whether water fluoridation results in a change in disparities in caries levels across socio-economic status.”

Promoters invariably argue fluoridation helps low-income kids, but Cochrane found no credible studies indicating this. In fact, there has never been a randomized, controlled study of fluoridation to determine safety and effectiveness.

On-the- ground experiences in cities like Boston, New York, Cincinnati and Pittsburgh provide more evidence. For instance, San Antonio reported in 2011 that “After 9 years and $3 million of adding fluoride, research shows tooth decay hasn’t dropped among the poorest of Bexar County’s children. It has only increased – up 13 percent this year.”

Finally, the ineffectiveness is apparent worldwide. A World Health Organization study found that nations that fluoridate have virtually the same cavity rates in children as nations that don’t (see graph compiled from WHO data below).

Several factors have major effects on dental health, especially diet, personal dental habits, professional care and genetics. But based on a wealth of credible data, fluoridation isn’t one of them.

This is only part of the story. The other major components are fluoridation’s health risks and dubious ethics. To be continued . . .

Rick North is the former CEO of the Oregon American Cancer Society (1994-99) and former Project Director of Oregon Physicians for Social Responsibility’s Campaign for Safe Food (2003-2011). He retired in February 2011 to become a volunteer confronting undue corporate influence in elections and the government. 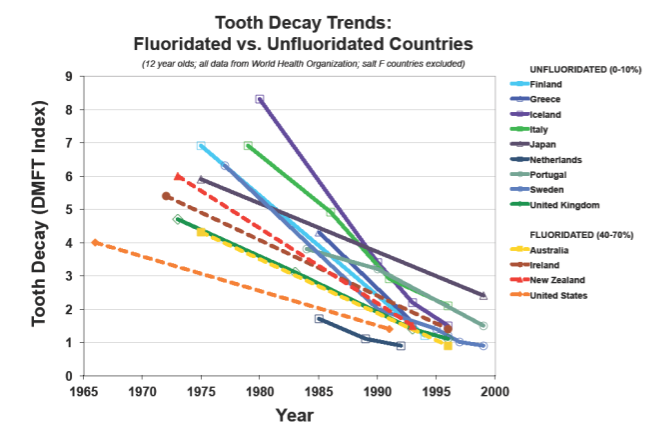