The Huangzhong district in Xining city, the capital of Qinghai Province, is home to 8,980 families, all of whom received assistance under China’s national policy to eradicate extreme poverty (below 2,300 yuan per person per year). Through social assistance and private sector financing, Huangzhong district succeeded in lifting all 28,706 residents out of extreme poverty after a four-year battle. In April 2019 the district proudly celebrated its official removal of the “poverty alleviation county” label.

Freedom from poverty should not just be signaled by a certain level of income, but also imply the security of public goods as essential as drinking water. However, the latter does not always come with a higher income. Although the 2020 deadline for elimination of absolute poverty in China has been met, supplying safe and accessible drinking water to all citizens nationwide is a battle that will extend beyond this milestone. At the National Water Works Conference held in January 2021, the minister of water infrastructure, E Jingping, emphasized that expanding piped networks and safeguarding drinking water quality will continue to be on the agenda of the Fourteenth Five-Year Plan.

In Huangzhong district is just one example of the relevance of this post-poverty national agenda. It was not until December 2020, a year after the community was declared to be no longer impoverished, that the Health Commission of Qinghai listed Huangzhong as one of 18 areas in the province where the local government accomplished targeted efforts in eliminating fluoride poisoning from drinking water.

The Role of Citizen Science

The same problem was identified by field researchers from MyH2O—a non-profit organization that connects rural communities with clean water solutions. They visited Huangzhong in summer 2020 and found that the quality of tap water samples obtained from five out of six Huangzhong households did not meet the national standard for drinking water. The fluoride levels of the five samples, taken using field portable spectrophotometers, range from 4-15 mg/L, exceeding the national limit of 1 mg/L by 1,400 percent in the worst instance. This finding corroborates a history of fluoride-related diseases in the region that is well documented in medical research, as well as Health Commission records in combating water-borne fluoride poisoning in the region.

In addition to top-down interventions, grassroots mobilization plays a significant role in the ongoing battle with drinking water insecurity in newly out-of-poverty villages. By championing the concept of citizen science, MyH2O has mobilized environmentally conscious youth to document acute drinking water health risks in more than 900 counties in rural China, including Huangzhong. In many of these villages, MyH2O field teams have worked with local governments and private sector partners to introduce lasting clean water solutions in addition to their work collecting baseline water quality data. In line with the national strategy, the organization’s mission is to help villages across China achieve access to safe drinking water.

The mission is a daunting one given the remaining gap in rural water and sanitation infrastructure. In the least developed areas of rural China, a lack of piped water supply coupled with limited availability of safely managed sanitation facilities continue to be the chief risk factors facing drinking water security. According to a National Bureau of Statistics report in 2018, 340 million rural residents in China have never used a flushing toilet, roughly 63 percent of the rural population at that time. As a result of unsafe disposal of human and livestock waste, excessive levels of ammoniacal nitrogen are among the most common problems found with rural water samples collected by MyH2O. 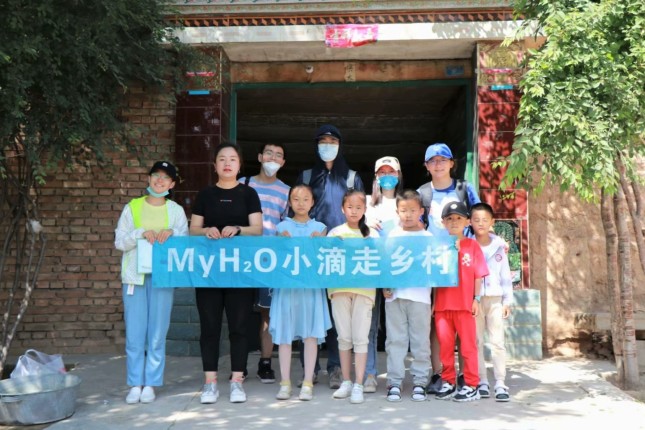 Photo Credit: Field team with local residents of Huangzhong, used with permission from the field research team at Dalian University of Technology.

The Primacy of Local Contexts

Even when the necessary infrastructure is in place, harsh climate conditions in the Western plateaus could cause season-long water loss when pipes freeze. Lijiaping Primary School in Guanghe, Gansu Province, another national target county for poverty alleviation, is one such place. Here, quantity is a more pressing concern than quality when it comes to drinking water.

In 2020, MyH2O administered a multi-selection survey at Lijiaping Primary School with a list of five problems that students typically encounter with drinking water at the school. The survey found “water supply interruptions” to be the most frequently reported issue (selected by 63.5 percent of 151 surveyed students). Although the team found water from the school tap visibly muddy, concern about water quality ranks last (selected by only 9.5 percent of surveyed students) behind all other issues, which include distance from classrooms to the tap, long queues, and shortage of cups. As a result, the problem-solving team prioritized year-round drinking water supply and an increased number of water access points in their solution design.

Researching local practices is critical to understanding water security issues in the rural west. Water cellars (i.e., cisterns), for example, are a widespread traditional practice for managing water scarcity in the arid and semi-arid regions of Western China where piped water supply is either not available or highly seasonal. These underground containers are constructed by rural households to harvest and store rainwater, as well as tap water when it runs. Many of the containers suffer from design flaws which undermine water quality, such as poor construction material, lack of a sedimentation tank, and frequent leakages.

In Tianshui, Gansu, home to many of these water cellars, researchers from MyH2O found in 2018 that the high turbidity levels of water samples obtained from the cellars were closely associated with cellar materials. Research into local practices is therefore key to understanding the sources of drinking water pollution and essential for devising solutions that fit communities’ ways of life. After consulting with local governments, MyH2O introduced two water stations in Tianshui to give residents access to sufficient safe drinking water while keeping water cellars as a source of non-drinking water.

Data as a Key to Change

Against the backdrop of China’s sweeping rural economic revitalization strategy, drinking water security is a relatively low-visibility issue that has often been underrepresented in the development plans of local governments. Grassroots community mobilization, therefore, is a vital channel for discovery, documentation, and advocacy of these issues. 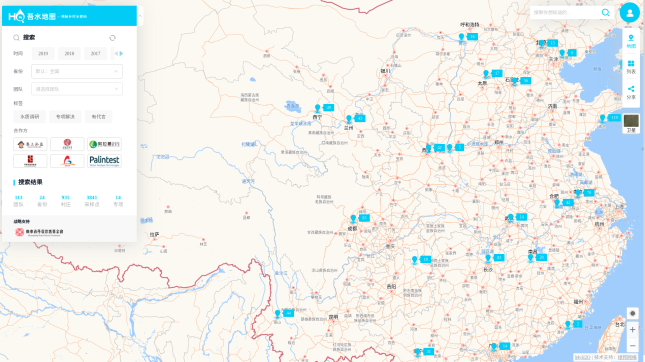 Promoting openness of rural water quality data is an important pathway to change. Making more water data accessible to the public is the first step to promoting action in response to water insecurities. The H2O Map, the newest version of which will launch in early Spring 2021, is a data-powered interactive platform that provides water quality data from 938 villages in China. The platform, accessible via browser as well as Wechat mini app (search ????), further enables users to request complete research reports or report a water problem in their own region.

In its community-based approach to data collection, MyH2O sees data as a catalyst for participatory processes where rural residents, governments, researchers, and companies come together in the diagnostics and solution finding for rural water issues. By joining local knowledge with resources from academia and industry, social sector organizations like MyH2O have a vital role to play in the unfinished battle for drinking water security in China.

Jiayuan Wang is a research associate at MyH2O. She has worked and written on development issues in the fields of water, sanitation, and financial inclusion in China.