home // News // This Chemical Kills. Why Aren’t Regulators Banning It? //

A fiery refinery blast in Philadelphia could be just the beginning.

Last month’s spectacular explosions at a large Philadelphia oil refinery complex injured five workers, terrorized city residents and drove up gasoline prices. But the impact could have been vastly worse had the explosions triggered a release from the refinery’s huge inventory of toxic hydrogen fluoride — up to 420,000 pounds’ worth, according to information the company filed with the Environmental Protection Agency in 2017. That disaster, had it occurred amid the chaos on the morning of June 21, would have imperiled hundreds of thousands of people living within a few miles of the plant.

The explosions occurred in the 149-year-old refinery’s alkylation unit, where hydrogen fluoride is used to convert butane and other chemicals into heavier hydrocarbons that raise the octane rating of gasoline. Of the nation’s approximately 135 oil refineries, only about 48 use hydrogen fluoride. Among refinery workers and safety experts, hydrogen fluoride-based alkylation commands the highest level of fear of any process used to make gasoline, and with good reason.

Hydrogen fluoride, also known as hydrofluoric acid, is a highly corrosive agent that requires specialized equipment and constant vigilance to prevent a release. Human exposure to just 170 parts per million in the air for 10 minutes can result in death or serious injury. Hydrogen fluoride binds to the calcium in human cells, causing severe, disfiguring chemical burns and compromising the heart, lungs and bones. Inhalation is rapidly fatal because of massive internal hemorrhaging and cardiac arrest.

In 2012, the release of a reported eight tons of hydrogen fluoride from a South Korean industrial plant sickened thousands of people in an agricultural area and left a disaster zone in its wake. Crops were destroyed and residents had to be relocated. Five plant workers died, and 18 others were severely injured. According to its 2017 filing with the E.P.A., the Philadelphia refinery stores about 24 times the amount of hydrogen fluoride that was released in South Korea.

In the 1980s, the oil giant Amoco commissioned tests in the Nevada desert to determine what would happen if hydrogen fluoride were suddenly released from a refinery. The results were nightmarish: All the spilled hydrogen fluoride immediately became airborne and formed a dense, ground-hugging aerosol cloud. Within minutes, dangerous concentrations of hydrogen fluoride — twice the lethal threshold — were detected two miles downwind.

Responding to the findings, oil companies invested in more safety systems — water sprays, chemical additives and emergency inventory dump systems — to try to contain a hydrogen fluoride release. None of these methods have been shown to be completely reliable. At the same time, oil companies lobbied to oppose further restrictions, and thus the fundamental danger has remained. Each company files a worst-case accident scenario with E.P.A., including the population at risk, but Congress has restricted this information to a handful of E.P.A. reading rooms.

On Feb. 18, 2015, the Los Angeles area came close to witnessing hydrogen fluoride’s effects firsthand when a powerful explosion ripped through a pollution control device at the Exxon-Mobil refinery in Torrance. Investigators from the U.S. Chemical Safety Board found that the explosion had hurled a 40-ton piece of equipment within five feet of striking two large tanks containing hydrogen fluoride. Three schools and hundreds of homes lie within a mile of the tanks. A crisis was averted, but barely. The refinery shutdown that followed the Torrance explosion raised gasoline prices, costing California motorists an estimated $2.4 billion at the pump. 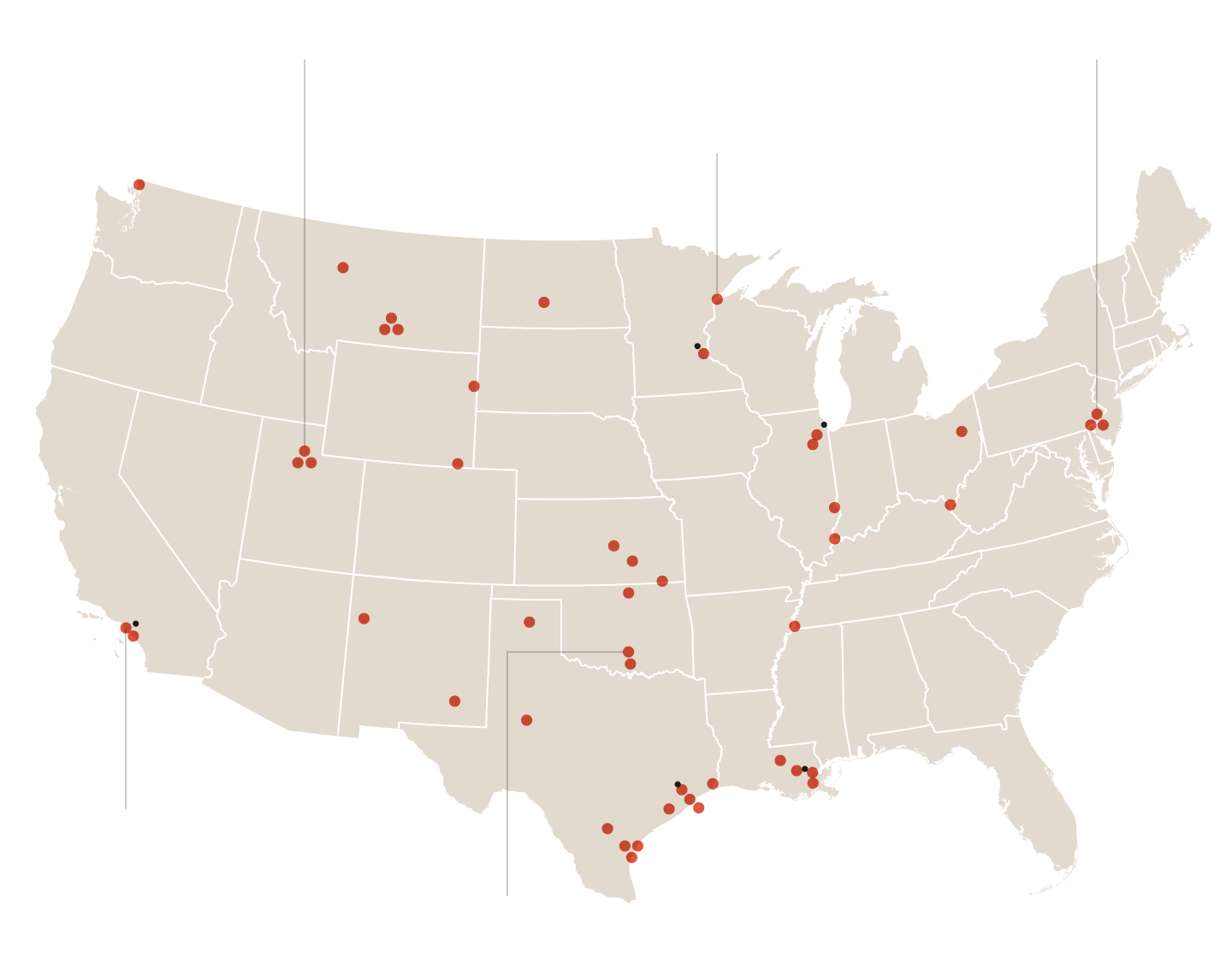 One of three refineries in the Salt Lake City area is phasing out H.F.

Superior, Wis.: Major explosion in 2018; refinery is rebuilding and will continue to use H.F.

Three years later, on April 26, 2018, an explosion devastated the Husky Energy Refinery in Superior, Wis., threatening the integrity of the plant’s hydrogen fluoride alkylation unit. The refinery is still rebuilding and won’t resume partial operations until at least 2020, at an estimated cost of $400 million. Investigators found that debris from the explosion pierced an asphalt tank that was located farther from the blast site than the refinery’s hydrogen fluoride tank, which could easily have been hit.

Accounts published by Reuters and The Philadelphia Inquirer indicate that the blasts last month in Philadelphia essentially destroyed the refinery’s alkylation unit. Under such conditions, it is miraculous that no hydrogen fluoride was released. Given the oil refining industry’s inadequate attention to process safety, however, it is only a matter of time before refinery workers and the public are exposed to hydrogen fluoride’s dangers.

The Philadelphia plant is closing, but that leaves 47 refineries in the United States still handling hydrogen fluoride. In four years, three major accidents have occurred that could have led to large hydrogen fluoride releases. This exposes a shocking level of disregard for public safety. Oil companies are passing along large accident-related costs to consumers while pleading poverty when asked to replace hydrogen fluoride with processes that use safer chemicals.

The oil refining industry can produce gasoline more safely, without using hydrogen fluoride. But industry associations have objected, saying the conversion is too costly. Refineries in Utah and Louisiana are quietly installing alkylation units that use safer catalysts like advanced sulfuric acid and ionic liquids that will never vaporize in an accident to threaten workers and the public.

Nonetheless, the industry is working diligently to defeat any regulatory efforts to phase out hydrogen fluoride. The American Chemistry Council, a trade association that represents major hydrogen fluoride producers like Honeywell, sponsors dubious, previously unknown grass-roots organizations like “Californians for a Sustainable Economy” that advocate for continued use of hydrogen fluoride to produce gasoline and argue that any restriction will cause refinery closures, job losses and higher gas prices. Voting on party lines in Southern California last month, a Republican-controlled committee of air pollution regulators narrowly defeated a community-supported effort to phase out hydrogen fluoride from two of the state’s refineries in populated areas near Los Angeles.

At the federal level, industry lobbyists from groups like the American Chemistry Council and the American Petroleum Institute were among those pushing President Trump’s Environmental Protection Agency to begin the process of scrapping Obama-era environmental rules that finally would have required oil refineries to evaluate using safer technologies. If enacted, the E.P.A.’s May 2018 Reconsideration Rule will turn the clock back years on the agency’s process safety regulations, squarely putting short-term corporate profits ahead of public safety. Even modest regulatory improvements — like requiring facilities to have third-party safety audits and to investigate the root causes of their own chemical accidents and near misses — stand to be repealed.

The E.P.A. should be moving in the opposite direction. Recently enacted toxic chemical legislation, as well as the 1990 Clean Air Act Amendments, give the agency ample authority to restrict or prohibit unduly hazardous chemicals in industry. That is particularly important with chemicals like hydrogen fluoride that are widely and unnecessarily used in urban areas and can be replaced with safer substitutes.

Millions of Americans will be safer if the E.P.A. takes positive action. If the it fails to do so, Congress must intervene.

Dr. Daniel Horowitz, an organic chemist, served as managing director of the U.S. Chemical Safety Board, a federal agency that investigates chemical disasters, from 2010-2018.