Drinking water is a major source of dietary fluoride intake in communities with water fluoridation. We examined the association between urinary fluoride adjusted for specific gravity (UFSG) and tap water fluoride levels, by age and sex, among individuals living in Canada. Participants included 1629 individuals aged 3 to 79 years from Cycle 3 (2012–2013) of the Canadian Health Measures Survey. We used multiple linear regression to estimate unique associations of tap water fluoride levels, age, sex, ethnicity, body mass index (BMI), use of fluoride-containing dental products, smoking in the home, and tea consumption with UFSG. UFSG concentration was significantly higher among participants who received fluoridated drinking water (mean = 1.06 mg/L, standard deviation = 0.83) than among those who did not (M = 0.58 mg/L, SD = 0.47), p < 0.01. UFSG increased over adulthood (ages 19 to 79). Higher UFSG concentration was associated with being female, tea drinking, and smoking in the home. In conclusion, community water fluoridation is a major source of contemporary fluoride exposure for Canadians. Lifestyle factors including tea consumption, as well as demographic variables such as age and sex, also predict urinary fluoride level, and are therefore important factors when interpreting population-based fluoride biomonitoring data.

The study sample had an approximately equal proportion of males (49%) and females (51%). The mean age was 32 years old, 73% were white, and 50% of the sample reported a high school, trade school, or college degree, while the other 50% reported a university degree or higher. The mean household income was $87,700 (median = $73,000) and the mean BMI was 24. Most demographic variables, including sex, age, and highest household education, had less than 5% missing data; 11% of participants had missing ethnicity and 15% of participants did not report either height or weight needed to calculate BMI.

Figure 2. Mean levels of UFSG by age group and CWF status. Error bars represent the standard error of the mean. 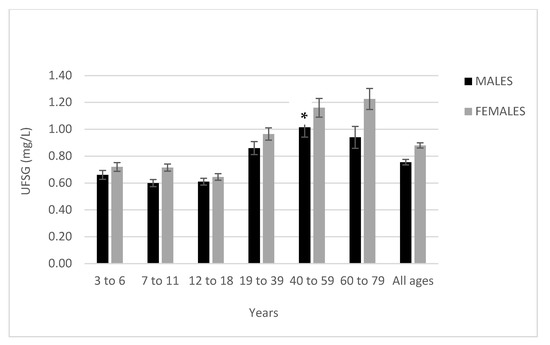