Dietary calcium binds Fluoride (F), thus preventing excess F absorption. We aimed to assess the efficacy of supplementing calcium-containing Eggshell Powder (ESP) on F absorption using urine F excretion and on fluorosis symptoms. In total, 82 women (41 Intervention Group, IG; 41 Control Group, CG) were recruited; overall, 39 in each group completed the trial. Morning spot urine was collected before (baseline, BL) and after (endline, EL) the intervention that was 6-months daily supplementation with 2.4 g ESP (providing ~1000 mg of calcium). Dental, skeletal, and non-skeletal fluorosis assessments was carried out at BL and, except for dental, at EL. Relative risk (RR) and linear generalized estimating equation were used to compare outcomes between groups. At BL, urinary F excretion in the IG and CG groups was similar, ~10 mg/L. At EL, urinary F excretion in IG women was six-fold lower (? = -6.1 (95% CI: -7.1, -5.1)) compared to CG. The risk of developing skeletal and non-skeletal fluorosis were significantly (p < 0.001) reduced in the intervention group. A significant reduction in urinary F excretion and reduction in many fluorosis symptoms were observed among women supplemented with calcium-containing ESP, thus providing evidence for using this dietary calcium source for mitigation of fluorosis. 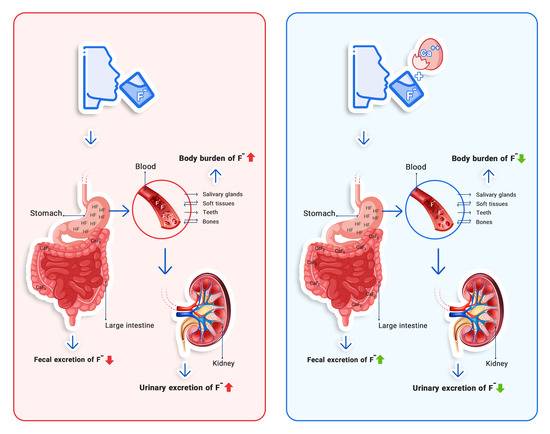 At BL, the independent two samples t-test showed that the average urinary F (~10 mg/L) excretion by the women between the intervention and control groups was similar (t = 0.11 (DF = 76, 95% CI: ?1.31, 1.47)). After the calcium-containing ESP supplementation, there was more than 50% (Table 3) significant reduction in the urinary F excretion of women in the intervention group compared with their baseline measurements using paired samples t-test; (t = 5.7 (DF = 76, 95% CI: 4.77, 6.49)). At endline, women in the intervention group had about six-fold lower urinary F excretion ( = ?6.1 (95% CI: ?7.1, ?5.1)) compared to women in the control group (Table 3). Urinary CR excretion was used as a measure of the spot urine collection. As shown in Table 3, all four collections of CR showed similar average concentrations of CR. There was no significant difference between the intervention and control groups in CR concentration at BL (p = 0.785) and EL (p = 0.571). In addition, there was no significant difference in urinary Ca excretion among the groups prior (p = 0.945) and after (p = 0.247) the supplementation of calcium-containing ESP (Table 3).

At baseline, the overall proportion of physical signs of skeletal fluorosis among women in this trial was 41.3% (43.6% in treatment and 38.5% in the control group). The two groups were similar (p > 0.05) in all skeletal fluorosis exercise testing (Table 4). After the six months supplementation of calcium-containing ESP, the overall proportion of physical signs of skeletal fluorosis significantly decreased from 43.6 to 17.9% in the treatment group (p < 0.001), while the control group did not change. The risk of developing skeletal fluorosis tested using the ability to bend body and touch floor or toe (RR = 0.21 (95% CI: 0.07, 0.69)), and stretch and fold arms to touch back of head (RR = 0.18 (95% CI: 0.04, 0.77)) were significantly reduced in the intervention group by 79 and 82%, respectively, compared with the control (Table 4).