It has been reported that fluoride exposure may cause serious public health problems, particularly neurotoxicity. However, the underlying mechanisms remain unclear. This study used Neuro-2A cells to investigate the effects of fluoride on the cytoskeleton. The Neuro-2A cells were exposed to 0, 1, 2, 4 and 6 mM sodium fluoride (NaF) for 24 h. Cell viability and lactate dehydrogenase (LDH) release were examined. It was observed that exposure to NaF reduced cell viability, disrupted cellular membrane integrity, and high levels of LDH were released. The observed changes occurred in a dose response manner. Morphologic observations showed that cell became rounded and were loosely adherent following exposure to NaF. Axon spines and normal features disappeared with high dose NaF treatment. The expression of MAP2 and synaptophysin decreased, particularly at 4 mM and 6 mM (P < 0.05) for MAP2. These results corroborate the morphologic observations. The content of glutamate and NMDAR (glutamate receptor) protein were assessed to help understand the relationship between synapses and neurotransmitter release using ELISA and Western-blot. Compared with the control, glutamate and NMDAR expression declined significantly at 4 mM and 6 mM (P < 0.05) group. Finally, the ultrastructural changes observed with increasing doses of NaF were: disappearance of synapses, mitochondrial agglutination, vacuole formation, and cellular edema. Taken together, NaF exposure disrupted cellular integrity and suppressed the release of neurotransmitters, thus effecting neuronal function. These findings provide deeper insights into roles of NaF in neuron damage, which could contribute to a better understanding of fluoride-induced neurotoxicity. 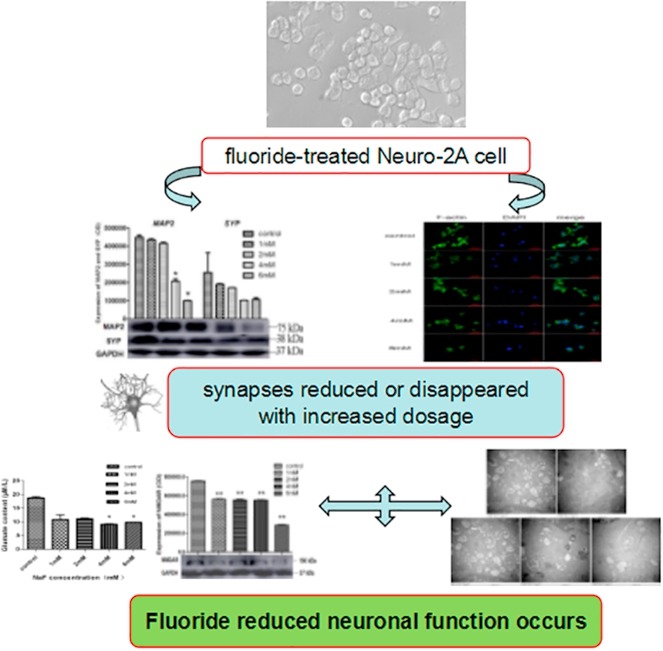 In conclusion, the effects of NaF on a cell’s survival and integrity
suggested that different concentrations NaF had direct toxic effects
on the Neuro-2A cell line. NaF not only reduced the expression of
select axonal proteins, but also prevented the secretion and delivery
of the neurotransmitter glutamate.We found that expression
of glutamate and its receptor, NMDAR, decreased with increasing
dosages of NaF. Presumably, NaF can influence the generation and
functions of axons, and limit the secretion and transmission of
neurotransmitters. Considering that the affected neurons are unable
to send signals to others, it is possible that excessive fluoride
exposure may play a role in the pathogenesis of mental disabilities
and other neurodegenerative diseases. However, while this study
reports the toxic effects of NaF in Neuro-2A, further studies are
required to determine the specific mechanisms involved.